It always comes back to love

How would you describe your role?

I’m someone who is a steady presence, who walks with someone who is nearing the end of their life. With comfort and gentleness I can help that person explore what's going on for them in terms of their spiritual orientation, whatever that might be. 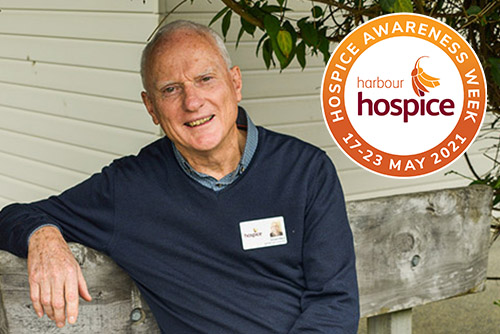 What that looks like can be anything from sitting alongside and chatting with them about their life or their fears, or simply sitting in silence with them. It can mean praying with them, anointing them or connecting them with a minister from their own faith tradition.

Are many people at peace with dying, in your experience?
The majority of older people are, and I would think this is because they are able to look back on their life and see that they've had a life, whatever that has been like. A lot have already lost people they've known and loved, so they expect this. For many it's a relief and they can say ‘I'm at peace’. They will miss the loved ones they're leaving behind, there is a certain amount of grief around that.

How do you help those who struggle?
People sometimes say, ‘Where’s God in all of this?’ and I say, ‘Look for those people who love you and who support you’. I talk an awful lot about love. I'm a great believer in that when we die all we take with us is the love that we've given and the love we received. Spiritual care, in whatever form it’s given, always comes back to love.

Is it usual for people to become more reflective?
Very, very much so. They become like monks in a cell, and what I mean by that is there's a tradition in the monastery that you go to your cell and your cell will teach you everything. In other words, sit silently and contemplatively in your cell and that will be the great learning place for you.

Sometimes these people are spending a lot of time alone. They're in bed a lot, they may not get many visitors. They do a lot of reflecting and without realising it they're doing their inner work.

Do people change their minds about what they believe happens after death?
I often see people who have thought there's nothing after death begin to believe that perhaps there is. There is an element of hope that perhaps they will continue on in some form. It is not unusual for people to say they can’t wait to be reunited with the person they loved the most in this life.

What do you believe about death?
Death is very mysterious. It's the last great mystery we have. A tremendous amount of literature around near-death experiences has emerged in the last 40 or 50 years and I've also heard from a good number of patients about their near-death experiences. Whether we're religious or not these stories give us a great deal of hope that life does exist beyond death.

What have people told you about their near-death experiences?
A common theme is that they can’t wait to go back, that there is a great source of love waiting for them. It’s a love that is indescribable, a love that we do not know. I draw on those stories and say to others, ‘You’re going home.’

Do you come from a religious background?
I'm not an ordained minister. In fact, I had a very long career in marketing and communications, and was the fundraising manager here for six years before I retrained as a spiritual companion and returned to Harbour Hospice in 2013.

In my experience, and even when people have been church goers all their lives, religion does not play a big part in the end. People don’t want their minister by their bed when they die, they want the people who have loved them around them.