‘This is a very special part of my life’

If Jenny Howlett’s face seems familiar, that’s because you’ll find her on reception every Tuesday at Tui House. She’s a warm and welcoming presence at the front desk but that’s not all Jenny does – that barely scratches the surface.

Jenny has been a loyal and enthusiastic volunteer for Harbour Hospice for 25 years and in this time she has done everything from helping the Family Support Team with their Open Doors programme to volunteering as a community visitor to driving patients and getting involved in fundraising events. 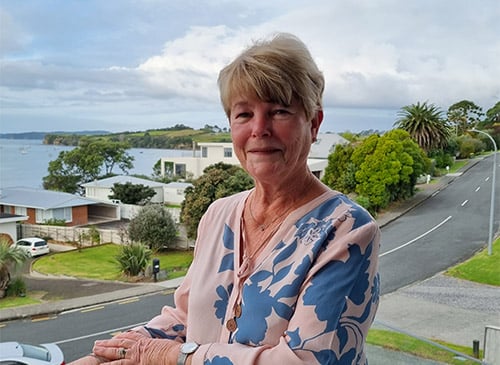 In fact, it was Jenny and former Harbour Hospice nurse Cath Bartlett who started Harbour Hospice’s highly successful Homes Tours in 2002. “When I look back on what we did, that was an awful lot of work,” she laughs. “But the first one went so well we’ve had them every two years since, except for last year.

“Finding the homes was a lot of fun,” she reminisces of the early days. “We’d just drive around and knock on people’s doors. I remember one house we went to in Matakana, the owners opened their front door and said, ‘Hello, we’ve been expecting you.’ Word had got out, you see!”

Of all the positions that Jenny has taken up, it’s that of community visitor that has given her the most reward.

“It’s a real privilege when people ‘let you in’. I have had some gorgeous patients over the years, and I honestly think I have received more pleasure from them than I have given.

“There was one gentleman, Digby, who would always grab my arm and say, ‘Come on Jenny, let’s GO!’ when I arrived to take him out.

“I had another lady who wasn’t sure at all about hospice coming to see her and her husband, who was very ill. But when I visited them for the first time I commented on the beautiful images of African women that she had hanging in the entrance of her home, and she said, ‘Jenny, you’re the first person who has ever remarked on my photos’.”

Jenny was inspired to volunteer for hospice after working as a receptionist for Dr Peter Woolford, a well-known Auckland doctor who specialises in palliative care. She has brought her husband Merv on board, too. He is Tui House’s go-to handyman when there are any odd jobs that need to be done.

“I’m lucky that Merv has always been very supportive of my volunteer work,” she says.

As long as there is something needs doing, or patients or carers who need her time, Jenny will be there.

“This is a very special part of my life,” she smiles. “It is where I’ve found my niche.”