The couple that volunteers together, stays together

Rob and Wendy Jones, from Milford, are both being recognised at this year’s 2021 Long Service Awards for 15 years of service

When Rob Jones retired he and wife Wendy decided to take up volunteering together. It was a decision that has enriched their marriage, and this year the couple, from Milford, not only celebrate their 47th wedding anniversary, they're also being jointly recognised for 15 years of service at our Long Service Awards.

“We haven’t necessarily worked in the same areas for hospice,” Wendy explains. “But volunteering has given us a shared interest.” 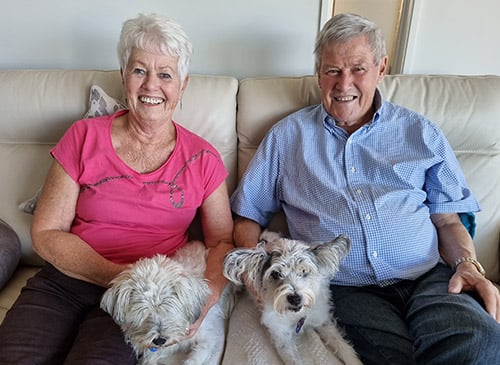 Wendy and Rob with their dogs Lucy Lu and Kyla.

With a 34-year career behind him as a cabin attendant for Air New Zealand Rob’s first role with Harbour Hospice was, naturally, in catering. Not one to scare at the thought of an early morning start, he would prepare the food for the fortnightly Rotary Club breakfast meetings held at Harbour Hospice North Shore for more than 10 years.

He is now a driver for patients, and says their interactions are incredibly rewarding.

“It is a bit like being a taxi driver, where you get to learn all sorts about the people you’re driving while you’re stuck in traffic,” he laughs. There was the patient he shared his lambsfry and bacon with, after she learned he was having some for dinner and said she hadn’t had it in years.

There was also the man who asked him to drive him to his local marina who left an indelibly lasting impression on Rob.

“I said, ‘Is there any particular reason we’re going here?’ and he said he’d wanted to go to Fiji but had put it off because he wasn’t feeling too well. He said, ‘I probably won’t get to Fiji now,’ so I sat there with him watching the boats and then a week later he passed away.

“I will never forget the words of wisdom he shared with me: Don’t put off doing what you love, do it now while you can.” Wendy began her volunteering career tending the Harbour Hospice North Shore gardens then after eight years moved on to working in the shops, where she sorts and displays the books.

“I’ve always loved reading,” she explains. “My parents actually bought a book shop when I was about eight and I was in heaven.”

The couple, who met through mutual friends and are parents to Rob’s three children from his previous marriage, say that volunteering has enriched their lives in ways they hadn’t imagined. “I enjoy working with the other volunteers and we have lots of fun and social occasions,” says Wendy.

“And working in the retail stores, you often get people come in and tell you their story. They’ve lost their mum or their husband, and how good hospice has been to them. It’s so nice to hear and it really does make you proud to volunteer for hospice.”