Since the first Warkworth Garage Sale 21 years ago, Christine Sanderson has been ‘Camp Leader’, chief sorter and saleswoman, rag cutter and deliverer, community liaison and, to many customers, the face of a local institution.

Christine recently took a break from her volunteer role to care for her husband Morris, with support from the organisation to which she has dedicated 25 years.

As strange as it was to find Christine absent from the Garage Sale, it was equally hard to imagine her in another role. But Christine first joined Warkworth Wellsford Hospice as a Family Support volunteer, in 1995.

Having driven a school bus on rural Warkworth’s winding, gravel roads for 15 years, Christine resigned after her employer replaced her mini-bus with a 60-seater. Then she saw a public notice calling for home care volunteers for the fledging hospice service.

“I had no idea what hospice was, but I thought it would be nice to work with adults, and I was pleasantly surprised,” she says. 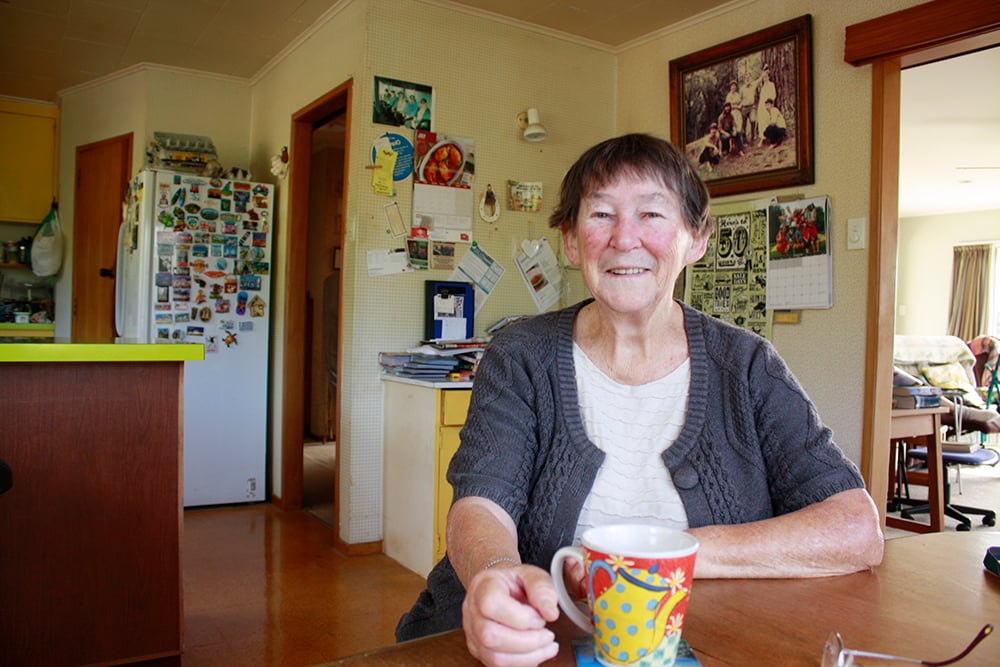 She joined the inaugural volunteer training course, which had so many willing participants that they outnumbered the patients who needed home care. Never one to sit around waiting for something to do, Christine took on the role of Fundraising Coordinator, worked in the Warkworth Hospice Shop as Thursday coordinator, and later joined the Catering Team.

In September 1999, Christine led a group of volunteers to formalise the garage sales that had been held on an ad hoc basis for several years. The first quarterly sale raised $600.

For some time, the sales were held in Christine and Morris’s own garage – a situation Morris was never comfortable with, given the number of people it attracted. Christine says it was a huge weight off her mind when hospice bought its own site and their home regained its privacy.

The quarterly sale eventually became a weekly event held on Friday and Saturday. When it started raising $1,000 a week, the volunteers commandeered the nurses’ garage, saying their fundraising was more important than the nurses’ cars. 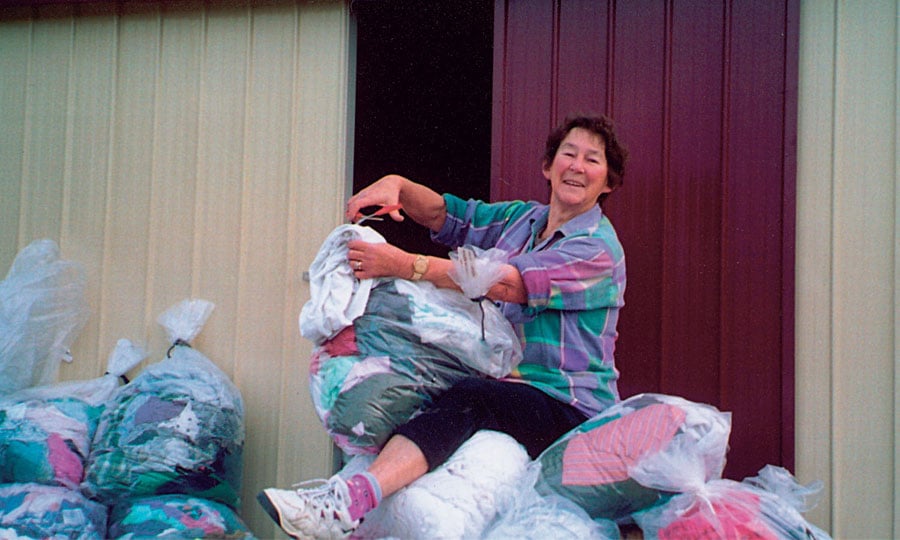 A rag-cutting group formed as a way of making money from unsellable clothing and became an informal but effective forum for volunteers to share problems and gain support. The garage sale supported other community needs too, helping more than 25 organisations with donations as varied as books, craft materials, blankets and beds.

Now held six days a week in a purpose-built space at Tui House and raising up to $10,000 a week for Harbour Hospice, the Garage Sale celebrated its 20th birthday last year with a special lunch for volunteers and staff.

Christine received special mention not only for her long service, but also for her consistent leadership – staff and volunteers could count on seeing her in the sorting room virtually every weekday morning. “You start with good intentions doing one day a week, then two days, then holy heck, it’s your whole life.”

This year, though, Christine’s priority has been at home, caring for Morris until he died in July. Morris lived with prostate cancer for five years and managed the condition well until the weeks of lockdown, when “suddenly it all turned to custard” and Christine turned to Hospice for support.

Although keen to limit the number of strangers coming in and out of their home, Christine found comfort in knowing the services were there when needed and appreciated Hospice’s 24/7 phone line.

“You’ll always hear a friendly voice, any time of day or night. They have time for you, they never bustle in and rush you, and you can get answers from them. I don’t like people who beat around the bush.

“We had equipment coming out our ears and a carer came three times a week to shower Morris, which allowed me time to re-gather my thoughts and do something that pleases me.”

Christine says she missed her fellow volunteers and not the garage sale itself, although her garage at home hints at a little nostalgia for the world of second-hand treasure. Her garage is stacked to the rafters with board games waiting to be sorted, waiting for a replacement piece or saved for ‘spare parts’. Christine calls it her ‘she shed’ and says it’s her escape.

“I can come out here for an hour, and then four hours later, I think I’d better have a cup of tea. I always put the radio on because at least it tells me the hour.”

Christine and Morris would have been married for 60 years in November, but they celebrated early with a family gathering in July. While considerably more sedate than their 50th anniversary ‘knees-up’, it was a touching milestone for the couple and their four children, eight grandchildren and four great-grandchildren.

Later this year, Harbour Hospice will acknowledge Christine’s 25-year dedication to the organisation with a long-service award alongside others who have reached significant volunteering milestones.