Judith Thompson is running her first half-marathon this year on the first anniversary of her stepfather’s death.

She’s making her effort count by running the Auckland Marathon in Malcolm’s memory and raising funds for Harbour Hospice, whose staff and volunteers cared for him in his final weeks.

Judith says that one year on, the suffering and anguish she felt during Malcolm’s last days has fortunately faded. “What has come strongly to the foreground is the memory of the compassion and skill of every single person at the Hospice and their caring, both for Malcolm, and for us as a family.”

Judith has entered the Auckland Marathon several times, running the 12km Traverse. This year, with the fun falling on Malcolm’s anniversary, she felt inspired to try a longer distance and to add a fundraising challenge in support and gratitude for Harbour Hospice.

“I’m delighted to be able to do something that even in a small way helps Hospice support other families like ours,” she says.

Judith has raised more than $3,400 so far. You can find her fundraising page here.

Please click here to support Judith and all those running the 2020 Auckland Marathon for Harbour Hospice. 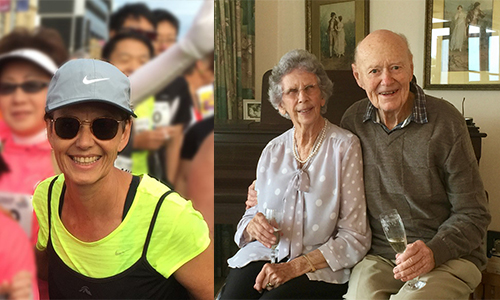