19 November 2021
Before Cheryll met Jon she carried her grandmother’s orchids round in buckets, from one house to the next. Having never lived anywhere for long she was reluctant to put them in the ground. But seven years into the couple’s relationship she took spade to earth and planted the orchids in the couple’s garden. “Jon still doesn’t get how significant that was,” she says. “But for me, that was a biggie."

This close couple met 15 years ago at a tenpin bowling event for singles. While Cheryll was there for love Jon will tell you he was there for the bowling. Undeterred, Cheryll made sure they became friends and then on a group outing at Auckland’s haunted theme park, Spookers, she grabbed his hand tight and didn’t let go.

The pair couldn’t have been happier until 18 months ago when Jon, who is in his late 50s, was diagnosed with a chordoma tumour - a slow-growing cancer of the tissue. It sits at the base of his neck and is now the size of a golf ball, with specialists declaring it inoperable.

Jon was also struck down with other health issues. Emergency surgery was needed to fit a pacemaker in early 2020 when his tumour began blocking his vagus nerve, and then a few weeks later he was in theatre again when his bowel ruptured the day New Zealand went into level four lockdown. Jon survived that surgery only for his sutures to fall apart then a reaction to his medication led to Jon developing cellulitis. 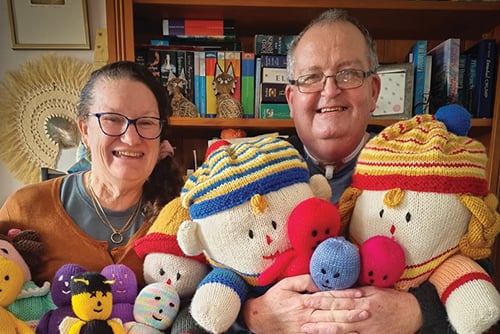 “Hospice are there when we need them and just knowing that makes it easier to cope.”

“We’ve had some real scares,” Cheryll says. “He’s also had to have a tracheostomy fitted as his tumour is blocking his airways.”

Relief finally came when Jon was referred to Harbour Hospice by his GP. “When we started receiving hospice help we were both a mess,” Cheryll admits. “We were just not coping at all because we’d been trying to do it all ourselves, and it was like everybody at Hospice untangled the mess.”

Jon’s pain levels and symptoms are now managed by Harbour Hospice’s community nursing team and doctors, in collaboration with Jon’s GP, and both he and Cheryll receive counselling from hospice counsellors. They’re in regular contact with the hospice social workers, who troubleshoot practical issues with them, and who’ve put them in touch with other agencies that can help.

All of this care has continued in lockdown via phone, with the hospice team on call to visit the couple if needed, with strict safety measures in place.

Until lockdown Jon was also receiving weekly visits from hospice volunteers, to give Cheryll a break. He would talk fishing with one and knit with the other!

Explains Cheryll, “I retaught him how to knit last year (his mother taught him when he was young) because he had turned to baking to deal with the stress and it was all going on my hips!”

She started him on peggy squares and he’s now so proficient he’s making complex knitted toys. With Christmas round the corner he has started to knit elves and Santas. “It helps to take my mind off – it’s good for the brain, the soul and the fingers,” says Jon.

At the beginning of last year the couple organised their dream wedding in just a week. They were married in an intimate ceremony at the Chelsea Sugar Factory in Birkenhead by Cheryll’s daughter, Melissa, which left not a dry eye in the house. Looking to the future, the smitten newlyweds are not sure what comes next. They’re planning small trips in their motor home, but Jon doesn’t like to be too far from their support network and the holistic care they receive from hospice. And, of course, they’re looking forward to Christmas with family and friends.

”We’re still working out what life can look like, Cheryll says. The one thing we do know is it’s about making memories.”

Walking alongside those with a life-limiting illness is a privilege for many reasons. You see enduring love, hear stories of past adventures and help people feel supported every step of the way. Cheryll and Jon’s story shows the immense impact possible thanks to your support. More families in your community need your support because they’re struggling to cope, feeling overwhelmed and alone. When you donate, your gift is put to use immediately.
Click here to donate
Back to latest news