BNI Mega is one of more than 100 New Zealand chapters of the business networking organisation that fundraise for their local hospice service - and financial adviser Radhika Beetham has a very personal reason to feel good about that.

Her husband James died in hospice care seven years ago, and Radhika will always be grateful to the staff and volunteers who helped her family through that harrowing time.

“James was in hospital when he broke his collarbone, as the medication he was on had made his bones brittle,” Radhika says. “He went into Hospice and we hoped he would get better and come home, but it didn’t work out that way.” 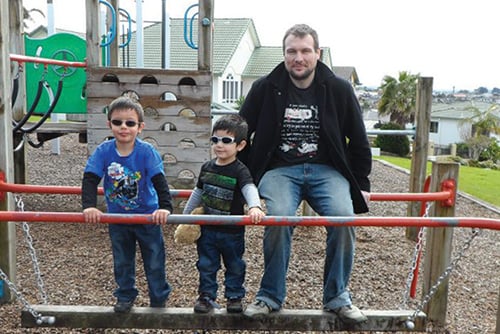 James enjoyed almost a year of reasonably good health after learning he had incurable cancer, but the last few weeks were extremely tough for him and his family, including Radhika and their two young boys, and his mother who had also been diagnosed with cancer. For the last two weeks of his life, James remained in the compassionate care of the nurses, doctors and therapists at Hospice’s North Shore Inpatient Unit. They managed his pain and worked with the family to balance visiting times and everyone’s emotional needs.

“Sometimes I would say ‘no visitors’ and the staff would gently keep people away,” Radhika says. “For us it was about his dignity and respect for him; he wanted people to remember him as he was.”

A second bed in James’s room allowed Radhika to stay overnight and access to a family room meant five-year-old Marcus and three-year-old Aiman could spend time there too. James turned 36 during this time and the family’s plans for a birthday celebration at the Parakai hot pools were put aside in favour of a small gathering in the unit and a party at the canoe club next door.

Hospice continued to support the family after James died, with phone calls to see how Radhika was faring, and a session of art therapy for the boys.

Radhika is grateful for the years she had with James, who she met at the age of 19 shortly after he and his family sailed from Scotland to New Zealand. Some of their special moments are captured in a memoir written by a hospice volunteer, who sat down with James and Radhika as they reminisced about their life together. Radhika looks forward to sharing this special booklet with Marcus and Aiman, now aged 12 and 10.

In the meantime, she is happy to support her BNI chapter’s fundraising for Harbour Hospice and doesn’t hesitate to share her experience to encourage her peers to be generous.

By making a donation to Hospice we can continue to provide compassionate, specialist care to people living with life-limiting illness and support to their families. To make a gift, please click on the community you wish to support.